Lane Kenworthy has a great post (http://lanekenworthy.net/2011/07/10/americas-inefficient-health-care-system-another-look/, h/t Matthew Yglesias) comparing health care spending and life expectancy. He goes beyond a simple scattergram of rich countries on the two variables to look at what has happened over time in 20 OECD member states. It plots how each country's health care spending per capita and life expectancy have increased over time. 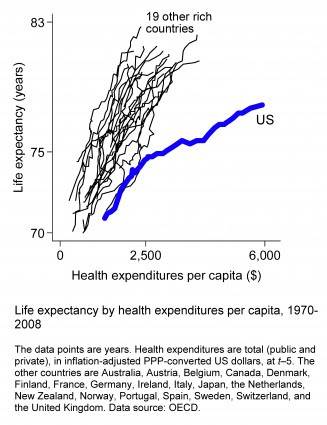 Notice how divergent the U.S. curve is. Not only does it have lower life expectancy than the other 19 countries graphed, it is gaining less in life expectancy for each dollar per capita of increased health care spending. As Kenworthy notes, this is especially true "after the early 1980s when we reached expenditures of about $2,500 per person (in 2005 dollars) and life expectancy of around 74-75 years." Since then, spending in the U.S. has more than doubled to over $6,000 (constant 2005 dollars), but we have only gained four years or so in life expectancy. Japan only spends about $2,500 per capita today, yet has achieved a life expectancy of about 83 years.
Kenworthy points out that using changes rather than levels of life expectancy and spending lets us factor out some of the differences between countries, citing higher U.S. murder rates, obesity rates, and geographic dispersion. I'm not sure these are such big drivers of differences in life expectancy; one major factor is the difference in infant mortality rates. According to the CIA World Factbook's 2011 estimates (https://www.cia.gov/library/publications/the-world-factbook/rankorder/2091rank.html), the U.S. has an infant mortality rate of 6.06 per 1,000 live births; the other 19 countries are all below the U.S., with Sweden and Japan having rates of less than half that. Moreover, geographic dispersion does not seem to make much difference within the United States: Of the top 20 states for life expectancy (http://en.wikipedia.org/wiki/List_of_U.S._states_by_life_expectancy), nine of them are also among the 20 least densely populated states (http://en.wikipedia.org/wiki/List_of_U.S._states_by_population_density), suggesting that if there is a correlation, it is likely to be small.
That said, Kenworthy's chart gives us a striking illustration of the inefficiency of the U.S. health system and how its relative efficiency has declined over time.
Kenneth Thomas at 6:59:00 PM No comments:
Share

On July 7, Good Jobs First released a new study ("Paid to Sprawl," http://www.goodjobsfirst.org/paidtosprawl) of subsidized relocations within the Cincinnati and Cleveland metropolitan areas. It found that from 1996 to 2005, 164 small and medium-sized enterprises received tax breaks to move, affecting an estimated 14,500 jobs. The moves took place using subsidies from the state's enterprise zone and  community reinvestment area programs. This is a noteworthy study giving us excellent documentation of a tip of the job piracy iceberg.

The study also found that 75-80% of the moves were away from the regional center, even when they were suburb to suburb. Collectively, the moves made thousands of jobs newly inaccessible to mass transit.

What is especially striking here is that we aren't talking about large companies like American Greetings or Sears, which have recently moved or threatened to move. It should remind us that although we can get transfixed by the mega-incentives going to automobile chip assembly plants or chip fabrication facilities, the subsidy issue affects tens of thousands of companies every year, which collectively add up to billions of dollars.

Job piracy should be the easiest subsidy-related problem to solve because it's obvious* that there is no benefit to a metro area, region, state, or country when a firm just moves jobs from City A City B. But two voluntary interstate agreement (Great Lakes Governors' Association in the 1980s, CT-NJ-NY in the 1990s) both collapsed as soon as they were signed. New York City has seen its firms targeted by New Jersey and Connecticut, losing some and paying large retention subsidies to keep others. Kansas City, Missouri, is in a similar situation on a smaller scale, as cities just across the border in Kansas target its companies.

Metro area agreements are being discussed in both Cleveland and Cincinnati, and I hope they're successful. Studies like "Paid to Sprawl" can help provide political impetus.

* Tim Bartik argues that moving jobs from a low unemployment area to a high unemployment area makes a region better off overall. Theoretically, this should be true, but there is little evidence that most subsidized relocations do this.
Kenneth Thomas at 6:05:00 PM No comments:
Share

Subsidy Cuts Could Reduce A Big Part of State Deficits

The Center on Budget and Policy Priorities estimated last month that state deficits around the country total $103 billion for fiscal year 2012 (http://www.cbpp.org/cms/?fa=view&id=711, h/t Dylan Matthews). Republican governors and legislatures have exploited these crises to slash Medicaid, education, and workers' rights. But there's another way: go after state subsidies to business.
Some of my best-known research has been to estimate the amount of subsidies to business given by state and local governments, going back to my 2000 book, Competing for Capital: Europe and North America in a Global Era (http://www.press.georgetown.edu/book/georgetown/competing-capital). In my new book (http://us.macmillan.com/investmentincentivesandtheglobalcompetitionforcapital), I update those estimates, showing that state and local governments give almost $50 billion in tax incentives and other subsidies to attract investment (what are generally called “investment incentives) and a total of $70 billion in all sorts of subsidies to business. Since data on local subsidies is much harder to obtain than that of state governments, unless I had better information for an individual state, in both books I estimated local subsidies to be the equivalent of state subsidies.
Thus about $35 billion per year is the state share of this total. Not all of these tax breaks are necessarily bad policy, but in most cases I've seen, they are enacted in order to compete with other states, and they largely offset each other without having much effect on the national distribution of investment. As economist Tim Bartik notes, for every dollar of new income that economic development spending generates in the state where it occurs, it reduces income in other states by about 79 cents (http://investinginkids.net/2011/05/03/is-competition-among-states-in-business-incentives-a-good-thing/). At the national level, then, there's not much bang for the buck, and Bartik's book (Investing in Kids) shows that even “well-designed” incentives that have a positive payback in the state where they're located have a negative effect nationally.
Let's say we reduce the $35 billion annual tab to $25-30 billion of “wasted” state incentives (though it would take more analysis to make an exact determination). That comes to just shy of 25-30% of state budget shortfalls nationwide. What does this mean in terms of jobs? According to the Economic Policy Institute's analysis of Bureau of Labor Statistics data (http://www.epi.org/page/-/IssueBrief306.pdf?nocdn=1), state government employment has fallen by just 60,000 jobs since June 2009, a pretty small number when you consider that $25 billion could create half a million jobs paying $50,000 per year in wages and benefits. The EPI reports that 407,000 jobs have been lost at the local level since June 2009, a much more significant figure but, again, one that could be more than fully offset by cutting $25 billion in local incentives. In other words, cutting state and local government subsidies could easily offset all the job cuts at those levels, and provide money for other programs as well.
Of course, this requires that subsidy reformers are able to hang on to the savings. In Michigan, Good Jobs First reports that just the opposite has happened (http://clawback.org/2011/06/17/michigan-slashes-corporate-subsidies-while-cutting-business-taxes-2/). While Governor Rick Snyder's budget has cut hundreds of millions in tax incentives, he more than made up for that by cutting business taxes by $1.8 billion annually, shifting the cost to less affluent taxpayers and people who depended on government programs. Tim Bartik adds that across-the-board business tax reductions are not cost-effective ways to create jobs and that Michigan's business tax cut is likely to be disappointing in its results (http://investinginkids.net/2011/05/23/michigan%E2%80%99s-recently-enacted-business-tax-cuts/).It would seem that eternal vigilance is just as much the cost of middle class economic security as it is of freedom.
Kenneth Thomas at 1:39:00 AM No comments:
Share

I've been considering blogging for some time now, but Ezra Klein's recent re-post (http://www.washingtonpost.com/blogs/ezra-klein/post/why-policy-relevant-academics-should-blog/2011/05/19/AGLLxEZH_blog.html) of Austin Frakt's comments on why policy-relevant academics should blog (http://blog.academyhealth.org/?p=259#more-259) finally pushed me into action.
This blog will cover the issues I care about the most: political economy in all its guises, from the global to the local level; economic development; and health care policy. The first two come from my professional interests, while the latter is personal – but as we know, the personal is political.
Professionally, I write primarily about competition for investment, especially the tax incentives and other subsidies that governments give to companies to attract them. Bidding for business can be seen at every level of government from the local to the supranational. Investment attraction is often seen as a potential motivation for races to the bottom in wages, taxes, or regulation: hence, my interests range from globalization to local economic development.
As I said health care issues are personal to me: I have battled insurance companies too many times over the years to think that our current for-profit health care system is a good one. You only need to look at the most basic data to see that the United States spends more and gets less than other developed countries. Though I'm only a consumer of health policy research, it's an issue I'm passionate about.
Today we face a situation where almost every state is under great fiscal pressure, yet state and local governments collectively give about $70 billion a year in subsidies to business, according to my most recent estimates (http://us.macmillan.com/investmentincentivesandtheglobalcompetitionforcapital). It means that one obvious way to address government economic stress is to reform subsidy policy, which will be the subject of my next post.
Welcome to my blog, and I look forward to many productive discussions!
Kenneth Thomas at 12:28:00 AM No comments:
Share
‹
Home
View web version