Romney Gets Incoherent on Pre-Existing Conditions

Mitt Romney was on the Jay Leno Show last night (via @didkins4life) and gave a completely incoherent account of whether people with pre-existing conditions should be able to get insurance. As the author of Massachusetts' health insurance reform as Governor, he was able to articulate the free-rider problem of people waiting to get sick to get insurance--which is why Romneycare and the Affordable Care Act have an individual mandate.

But Romney stumbled badly when Leno asked him what should happen to people with pre-existing conditions. If they had had insurance before, Romney said they should be able to get it again. (Note, however, he says nothing about how long ago they'd had insurance.) But if they never had insurance before, Romney gave what was essentially a non-answer: a) You can't play games like that; b) "But you have to find rules that get people in that are playing by the rules.” That, of course, would be a mandate, but he can't bring himself to say it because of primary politics and, as Greg Sargent points out, perhaps his own beliefs as well.

The alternative, though, is to do nothing for the uninsured who get sick. Romney did not rule that out, but merely tried clumsily to finesse it. As Mark Thoma says,


If we could make people pay the full cost of this wager that they won't need insurance, i.e. if society could turn it's back and say you made your choice, now live (or die) with it, a mandate wouldn't be needed. But we can't (and I wouldn't want to live in a society that could).

I wouldn't want to live in such a society, either, which is why we need universal coverage. Though I'd prefer single payer, right now the Affordable Care Act's individual mandate is as close as we are going to get. Romney's repudiation of it is as hilarious (and depressing) as that of the Heritage Foundation. As a result, his plans for the uninsured look distressingly like what Alan Grayson called the Republican health plan: 1) Don't get sick. 2) If you do get sick, die quickly.
Kenneth Thomas at 4:21:00 PM No comments:
Share

The flurry of posts earlier this month on middle class decline (me, Lane Kenworthy, Matthew Yglesias, Kevin Drum) made me think some more about what the best way is to show what's happened since the peak of real wages in the early 1970s. While in my opinion there is no perfect measure, there are a lot of choices to be made, and I argue below why real wages for production and non-supervisory workers, with an adjustment for non-wage compensation, is the best single measure.

While we all live in households or families, over the past 40 years, there has been a decline in persons per household (see Kenworthy) and an increase in incomes per household as women's labor force participation has increased. The decline in persons per household means that a household needs less income than in the past to have a fixed per capita income. The increase in incomes per household has meant that households have had higher real income even as real individual income has fallen, as pointed out by commenter peggy_Boston in the comments thread of Drum's article. To my mind, this is partly causal; that is, because real wages have fallen, families have had to have more incomes in order to maintain their living standards. Indeed, falling real wages have forced families to run up high levels of debt, with non-mortgage debt reaching 1/3 of family income by 2005. Therefore, I think individual data is the right choice here.

The median (middle value, with an equal number of observations above and below it)  has big advantages over the arithmetic mean in trying to show the typical situation in a distribution of values. It is especially useful for income distributions, where the presence of very high incomes means that the mean is much higher than the median. In fact, the literature on "decoupling" (see Kenworthy above) demonstrates just how much this is the case. But I think that "production and non-supervisory workers" captures our intuition about who is in the middle class even better than the median does. This series, in Table B-47 of the Economic Report of the President, is an average of the earnings of employed persons in private (non-government), non-agricultural jobs. It includes about 80% of the private workforce and 64% of the total non-agricultural workforce. Despite being an average, its exclusion of supervisory workers means that virtually all of the extremely high values that distort the mean of the entire workforce are eliminated. It is, essentially, the mean income of the bottom 80% of private workers. The biggest drawback to this dataset is that it does not include non-supervisory government workers, but I think that is outweighed by its broader coverage of the middle class than the pure median income (or middle quintile, as in Kenworthy's post).

For the counterargument, that changes in composition of production & non-supervisory workers can cause distortions that the median wage is not subject to, see Dean Baker (p. 9).

Baker mentions hourly earnings rates in some cases. As I discussed in the comments section of my March 11 post, the decline in hours worked per week (from 36.9 hours in 1972 to 33.6 hours in 2011) suggests to me that we need weekly, not hourly, wages.

Choice 4: Which inflation data to believe?

Shortly after President Clinton's first election, I predicted to my students that, because his message of middle-class stagnation ("It's the economy, stupid") was dependent on how inflation was measured, that conservatives would soon attack the official Bureau of Labor Statistics inflation data. The issue is, if inflation is overstated, then the decline in real wages reported by the BLS could be overstated or even non-existent. Conversely, if BLS data understates inflation, then real wages have fallen even faster than shown in Table B-47.

Unfortunately, I did not publish this prediction, so you'll have to take my word for it that I predicted the attack on inflation data that culminated in the Boskin Commission in 1995. I always took this to be a political attack rather than a scientific one. My attitude has always been that trade theory (i.e., the Stolper-Samuelson Theorem; see Ronald Rogowski's great book Commerce and Coalitions for an explanation of this topic, which I intend to discuss in a later post) predicts that real wages in a relatively labor-scarce country like the United States will fall as trade expands, and the data shows that real wages indeed fell: so what reason do we have to question the data? In the end, though, the Commission concluded that inflation was being overstated by about 1.1 percentage points a year, and the BLS was mandated to adjust its methodology.

Barry Ritholtz takes an even more jaundiced view of the Boskin Commission than I do. Paul Krugman, on the other hand, is not convinced that inflation is now significantly underreported, citing the work of the Billion Prices Project. For the moment, I do not see reason enough to toss out the BLS data, despite the possibility that the Boskin Commission may have introduced distortions into it.

Martin Feldstein and other economists argue that it is not sufficient to look at wages alone, because the non-wage share of compensation has been growing over the past few decades. As I posted before, total employee compensation includes everyone from the CEO to the janitor, so it overlooks the fact that the top 1% have made almost all the gains from decades of economic growth. Nevertheless, it is clearly true that non-wage compensation has grown faster than wages, as we will see below. In fact, Yglesias suggests that the 2000s actually saw real compensation growth at the median, but it was all in the form of health insurance benefits. Of course, there is some debate over how much value actually comes from extra employer payments for health insurance, as Baker's paper (p. 10) details

A different way to factor in compensation that I had seen before on the Economic Policy Institute's website was explained to me in an email by Jared Bernstein and is documented in the footnote of his blog post here. It takes the ratio of total compensation to total wages, both of which are in National Income and Product Accounts Table 1.12 (you can set it to a wider range of years, as I did). Whereas he applies it to median wages, I apply it to Table B-47 and get the following results:

By this measure, compensation in 2011 for most workers was still almost 6% below its 1972 peak. The advantage of this adjustment over Feldstein's procedure is it strips out the wage inequality of the compensation data, although there is still some overstatement based on inequalities in non-wage compensation. Still, I think this gives us our most accurate picture of what's happening to the bottom 80% of workers.

That is not to say that this is a perfect measure even with those caveats. It matters what is happening at the top, too. If high wage earners were seeing their income fall faster than middle-class workers, then inequality would be falling and we would probably object less to what would then look like the much-vaunted "shared sacrifice." But of course, as Kenworthy notes, the share of the top 1% more than doubled from 1979 to 2007, from 8% to 17%. With inequality rising as it is, we now seem to be in danger of a consequent sharp shift of political power to the 1%, as MIT economist Daron Acemoglu told Think Progress' Pat Garofolo.

I look forward to your comments, especially if I've gotten something wrong.


UPDATE: By way of comparison, here is Lane Kenworthy's chart. 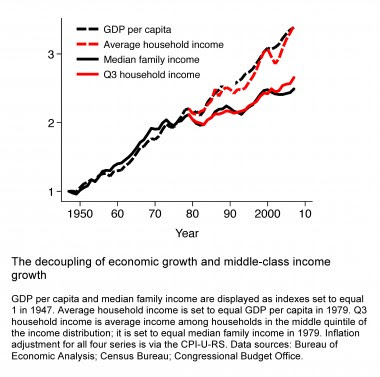 In it, you can see that by either median family income or 3rd quintile household income, incomes started rising shortly after 1980, whereas in my table compensation-adjusted real wages continued to fall until 1995. You can also see the divergence in median family income and Q3 household income between 2000 and 2007, as noted by Yglesias. Whereas the increase is made up entirely of nonwage compensation in the Q3 household income series, in my table at the individual level we have an increase made up partly of wages and partly of nonwage compensation.
Kenneth Thomas at 2:26:00 AM 2 comments:
Share
‹
›
Home
View web version