In a depressing example of poor health outcomes in the United States, The Economist (via The Incidental Economist) shows that for 10-24 year olds, the mortality rate (deaths per 100,000 population) is considerably worse in the U.S. than in comparable rich countries (24 other OECD members plus Cyprus, Malta, and Singapore).

At about 59 deaths per 100,000, the U.S. rate was double that of South Korea, Sweden, Germany, Switzerland, Japan and the Netherlands, and almost triple the rate of Singapore. As the graph below shows, the U.S. has the highest level of deaths from traffic accidents (though not much higher than Portugal, New Zealand, or Greece). However, as the story points out, the U.S. has by far the highest rate of deaths in this age group due to violence: 8.9 per 100,000, which appears from the graph to be about three times the rate for second-place Israel. The story notes that the violent death rate in Britain is only 1/18th that of the U.S. for this age group. 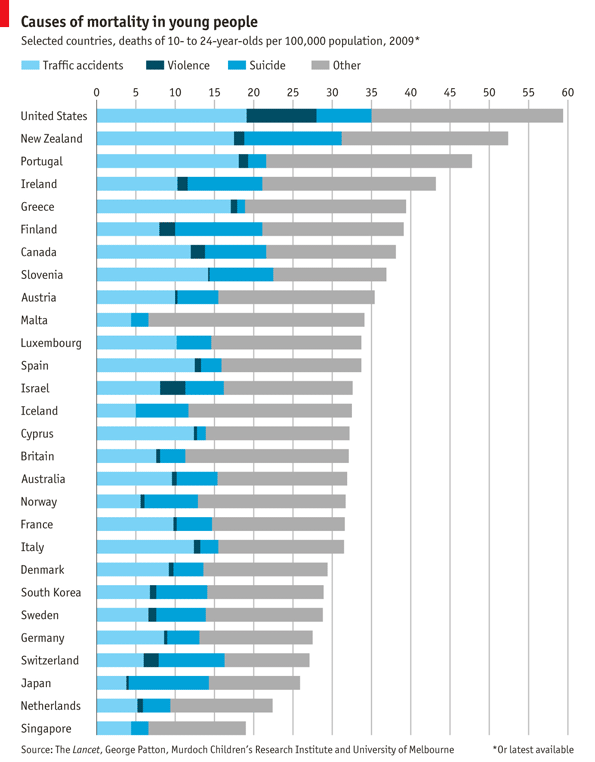 The U.S. is further back on the suicide rate, where New Zealand is worst at about 12 per 100,000, followed by Finland at approximately 11, and Japan and Ireland about 10.

For "other" causes of death (disease plus non-auto accidents; thanks to commenter Marc Brown at The Incidental Economist for clarification of this point), Portugal narrowly leads the United States.

What does this mean for policy? Certainly automobile use is not going to change much any time soon, absent huge increases in gas prices and better mass transit and high-speed rail. Of course, as Thomas Friedman has advocated, the U.S. could force the price of gas up by raising the gasoline tax by $1-2 per gallon, but no one in a position to make this even possible advocates it. America's gun policies, similarly, will not change any time soon. According to a survey by Hepburn et al. (2006), Americans currently own somewhere between 260 to 305 million firearms. If the Supreme Court upholds the constitutionality of the Affordable Care Act, health insurance coverage will increase, perhaps slightly lowering mortality rates for some diseases.

In the near term, then, it appears unlikely that the mortality rate will change very much. Sorry that there's nothing less depressing to report. I'd be interested to hear your views on these issues, since obviously I have just scratched the surface here.
Kenneth Thomas at 12:51:00 AM 2 comments:
Share

The Tax Justice Network has just released the April edition of its podcast, TaxCast (via Tax Research UK). Among the highlights:

In the wake of the Indian Supreme Court's decision on Vodaphone, India will retroactively change its tax laws to make Vodaphone's tax dodging illegal. Britain's Chancellor of the Exchequer, George Osborne criticizes India over this despite recently doing the same thing himself! (The United States has also passed tax laws with retroactive effect.) In addition, India has pledged to adopt a general anti-avoidance principle strong than anything OECD countries have done.

The European Parliament has passed a resolution calling for country-by-country reporting of corporate accounts (Publish What You Pay), criticizing the weak EU tax information exchange agreement with Switzerland, and setting automatic information exchange as the desired basis for fighting tax evasion and  avoidance.

The Center for Economic and Policy Research (CEPR) published its commentary on Monday's release of the Social Security Trustees Report, which found that the Social Security trust fund would be exhausted in 2033. CEPR rightly blames the recession for the deterioration of Social Security's finances. As I argued last September with regard to falling health care coverage, the new results from the Trustees show the need for a jobs agenda. The CEPR analysis highlights just how crucial jobs are to Social Security's solvency:


As workers have found themselves without jobs, Social Security has received fewer contributions. The 2007 Trustees' Report projected 169.0 million workers in 2011 earning $6.5 trillion in taxable earnings. Last year, there were only 157.7 million workers earning $5.5 trillion.

In other words, there was a $1 trillion shortfall of income in 2011 alone compared to the pre-recession baseline. If this doesn't highlight the need for much greater action on the jobs front, nothing does.

Yet what is the Republican response to this situation? At the federal level, there has been universal opposition to anything that might create more jobs as long as Obama is President. At the state and local level, as Paul Krugman points out, 70% of the decline in public sector jobs has come in Texas and in the states where Republicans took control of government in 2010.

What we see from the Trustees Report is that as jobs and income decline, Social Security is directly harmed. And I'm starting to have the feeling that for the Republicans, this is a feature, not a bug.
Kenneth Thomas at 4:20:00 AM 2 comments:
Share
‹
›
Home
View web version