Via @exiledonline, I learned today (July 18) that Canadians are richer than Americans. This is rather surprising, since GDP per capita is higher in the U.S than in Canada.: $48,100 vs. $40,300 (at purchasing power parity or PPP), according to the CIA World Factbook. But in fact things are much worse than that, as 15 OECD countries (plus Singapore and Taiwan) have higher median wealth than the U.S. does. There may even be more, as the Credit Suisse report I discuss below does not give median wealth data for several countries with higher mean wealth than the U.S.

Most reporting has been based on a story that was run in the June 30th Globe and Mail claiming that average (mean) Canadian household wealth had reached $363,202 vs. just under $320,000 in the U.S. This is not a particularly informative statistic, however, since wealth is even more unevenly distributed than income, and income in the U.S. is already highly unequally distributed. What we really need is median net worth, i.e. the level at the exact middle of the net worth distribution in a country. G&M commenter "TJMone" picks up that point, receiving an answer from "porkbarrel pundit": a Credit Suisse report from October 2011 (via LSM Insurance), shows that the median net worth per adult in Canada was $89,014, compared to just $52,752 in the U.S. (all figures in U.S. dollars).

American reporting based on the study in the G&M did not start until 18 days later, when an article in U.S. News & World Report picked it up (Canadians are right: no one in the U.S. is paying attention to them). Moreover, no one picked up on the much better data in the Credit Suisse report until later in the day, when Dylan Matthews at Wonkblog wrote a great story on it (there are many high-quality comments, too). It turns out that lots of OECD countries, including economic basket cases Italy, Spain, and Ireland, have higher median wealth than we do. See the chart below: 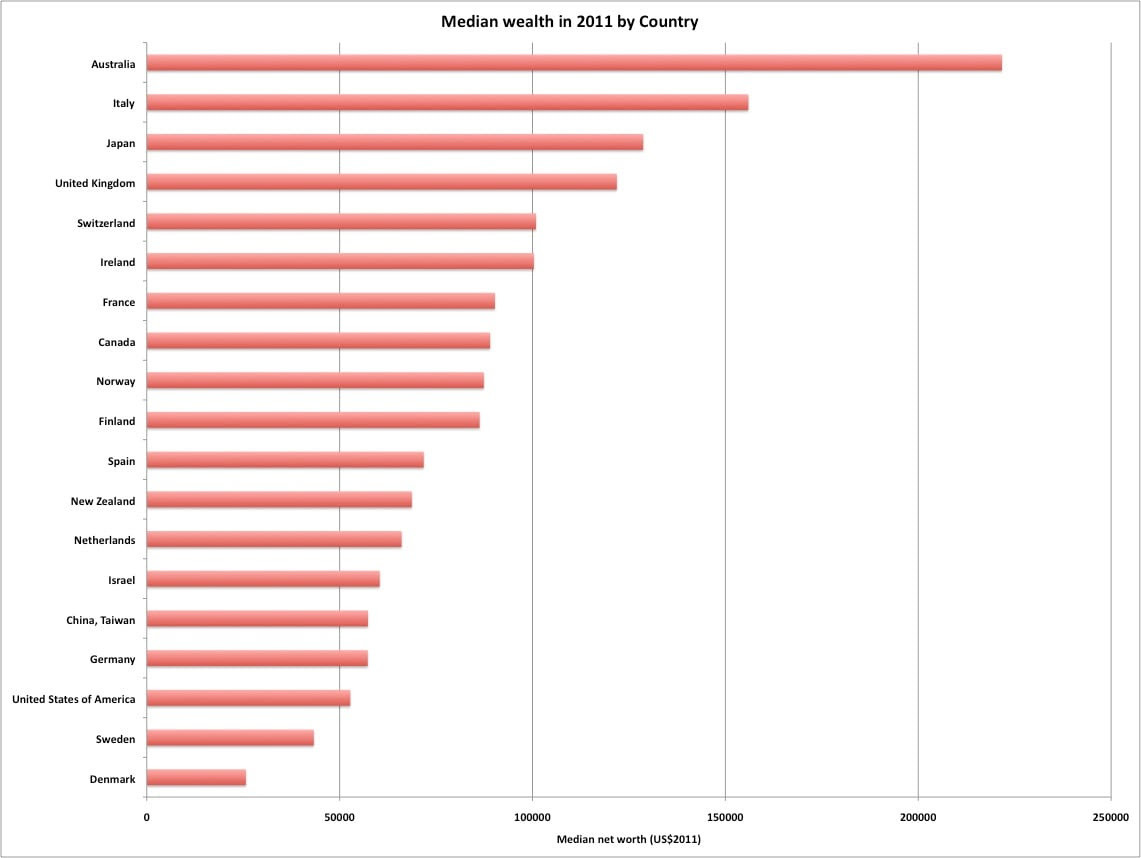 Source: Dylan Matthews, based on data from Credit Suisse

It is mind boggling that median Australian net wealth per adult is four times that of the U.S., and Italy is three times as high. Ireland and Spain, meanwhile, are also higher despite having housing busts similar to that in the United States. What is going on here?

Part of the answer is more equal income distribution. According to the Credit Suisse report, mean wealth per adult is just shy of 5 times median wealth in the U.S., whereas in Canada it's a little less than a 3:1 ratio (see Table 7-1). Other countries with higher median but lower mean net worth per adult are Taiwan, Finland, Germany, Ireland, Israel, the Netherlands, New Zealand, and Spain. Australia has a higher mean net worth than the U.S., but its ratio of mean to median net worth per adult is less than 2:1.

Another part of the answer may be that in many other wealthy countries, households have less debt. If you remember Michael Moore's movie Sicko, in one scene he interviews an upper-middle class French family and asks them what debt they have. Their only significant debt is their mortgage, because they didn't have to take out loans to go to college. The Credit Suisse report finds this pattern (unfortunately, only mean debt, not median debt). Mean debt per adult (see Table 2-4) is $59,362 in 2011 for the United States, whereas for France it is $40,873, Germany $33,424, and Italy only $24,291. Of course, this isn't true of all countries: Ireland and Switzerland both have much higher mean debt per adult, but they also have about twice the median wealth per adult of the U.S.

This analysis is hardly exhaustive; I bet a good book could be written on the subject.

One final point: Matthews skewers the claim by Globe and Mail author Michael Adams (whose firm conducted the study discussed in his article) and later commenters on both sides of the border who accepted Adams' claim that this was a historical first. As he shows with U.S. and Canadian government data, Canada's median household net worth was significantly higher in 2004-5, before the crisis, than here in the U.S. Given the huge disparities between the United States and some of the other countries, it is likely that net worth per adult has been higher in a number of these countries for quite some time. These data reflect trends that have been developing for a long time, and are not purely driven by the economic crisis or by any single set of policies. But they make for sobering reading, and deserve more than the superficial analysis most of the U.S. press has given them so far. Bravo to Matthews for a great piece of analysis.

Is the Noose Closing Around Romney's Tax Returns?

Problems on my blogging computer have kept me away from here for a week, and a lot sure has happened on the Mitt Romney tax story in that time. The Obama campaign has gone after Romney on his tax havens and tax returns is two separate television ads, including a new one yesterday. Calls have mounted from Republicans for Romney to release his tax returns, yet as of last night Romney was standing firm that he would not release any besides 2010 and (so-far estimated) 2011. The most interesting development to me is that speculation on what could possibly be so bad in the returns is narrowing down to one year, 2009.


1) We know from the 2010 tax return, in which he had a net capital loss carryforward from 2009, that he zeroed out his net capital gains - including from carried interest Bain income - in 2009.

2) 2009 was the last year in which he received certain Bain payments as the playout of his "retroactive retirement."

3) It's been hard to understand what benefit he thought he was getting from the Swiss bank account, and there was an IRS amnesty program in 2009 for fraudulent nondisclosure of offshore income.  If he had to come clean in 2009, this might be embarrassing, especially given that there was an iron fist inside the IRS leniency offer (i.e., if you held out, they might get you without any amnesty).

So it is possible that Romney had a high income, but an even lower tax rate in 2009 than 2010--maybe even zero. The other possibility is that he got caught up in having an undeclared offshore account and took the IRS amnesty in 2009.

Matthew Yglesias also thinks the IRS amnesty program could be the answer:


Failing to apply for the amnesty and then getting charged by the IRS would have been both financially and politically disastrous. So amnesty it was. But even though the amnesty would eliminate any legal or financial liability for past acts, it would hardly eliminate political liability

Wouldn't it be great if we knew which Swiss bank Romney's money had been hidden in? As you may know, the IRS nailed Union Bank of Switzerland (UBS) for helping Americans commit tax evasion (the illegal kind, as opposed to legal tax avoidance). As a result, UBS coughed up the names of more than 4400 Americans (out of 52,000 originally sought by the IRS) who had accounts there. This was the backdrop to the IRS amnesty: for the first time, the U.S. had breached Swiss banking secrecy and Americans with Swiss bank accounts could no longer be sure that their secret was safe.

In fact, we do know which bank held $3 million of Ann Romney's blind trust. It was UBS.

How do we know? Brad Malt, the Romneys' trustee, said so. Not only that, when Romney released his 2010 tax return in January of this year, he had to amend two previously filed disclosure forms, for 2007 and 2011. In 2007, he had not specified that the UBS account was in Switzerland, not the U.S., according to ABC News (UBS has branches in the U.S.).

Also, as Linda Beale points out, it would be great to see 1999-2002 to help sort out the Bain claims and counter-claims.

The entire tax return saga is emblematic of a much larger issue: How there is one set of rules for the 1%, and a different one for the rest of us. If the consequences of releasing his returns would be so much worse than the sustained onslaught Romney is already absorbing, I have to question whether Romney can even finish the race.
Kenneth Thomas at 4:59:00 AM 6 comments:
Share
‹
›
Home
View web version