The release last month of the Economic Report of the President has elicited a great deal of commentary, but none that I have seen touches on what I consider the best measure of long-term income trends, real weekly wages of production and non-supervisory workers, which is contained in Appendix Table B-47, "Hours and earnings in private non-agricultural industries, 1965-2011." According to a Bureau of Labor Statistics staffer I spoke to some years ago (so the percentages may have changed slightly), this covers 62% of the entire workforce and 80% of the non-government workforce. This lets us focus on average workers and excludes what is happening to high-salary workers. Using weekly rather than hourly real wages takes out the impact of varying hours worked per week over the years. The table below extracts from B-47 to reduce its size. The inflation is adjusted using 1982-84 dollars as its base.

Thus, we have 39 straight years where real wages have yet to get back to their 1972 peak and, indeed, they are a long way from that peak still. This is doubly surprising when we consider that productivity has been increasing steadily throughout that period, approximately doubling from 1970 to 2011, as shown by the Federal Reserve Bank of St. Louis' data: 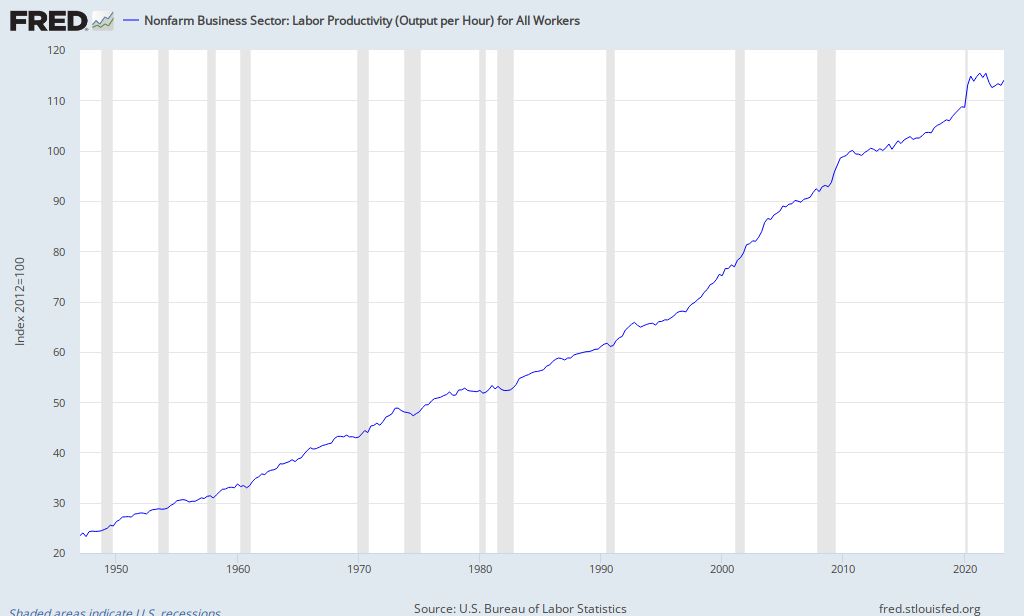 Loading ...
Due to the convergence of rising productivity with falling wages, we should not be surprised to see that labor's share of non-farm income has fallen: There are other ways to track the income of average workers. The Economic Report of the President highlights median household earnings in its Figure 1-1, but these data are affected by changes in the number of incomes per household, primarily the result of increased women's labor force participation. The bottom line is that the increase in incomes per household obscures the fall in individual income for most workers.

Some conservative economists, such as Martin Feldstein, have argued that we should instead use real compensation instead of real wages and use the same inflation adjustment ("price deflator") when analyzing trends in compensation and productivity. There are multiple problems with his analysis. First, he claims that the growth of compensation (1.7% per year) is almost as high as the growth of productivity (1.9% per year) over the 1970-2006 period, but ignores the power of compounding. The 0.2 percentage point difference may not sound like much, but over 36 years productivity grew by 96.9% (1.9^36) and compensation by only 83.5% (1.7%^36) using his preferred measure (and I can't comment on its correctness), so workers' compensation should still have grown by substantially more than it did.

An even bigger problem is that the compensation series includes all workers, not just average workers, so it lumps CEOs and janitors together in a single measure even though we know that the 1% soaked up most of the income gains before and after the Great Recession. Moreover, the nonwage portions of compensation, such as health insurance and defined benefit pensions, have eroded much more for average workers than for the 1%. Thus, this measure is completely unsatisfactory for understanding what has happened to the average worker.

So, we come back to Table B-47 and the real wages of production and non-supervisory workers. The fact that, adjusted for inflation, wages still remain almost 14% below what they were 40 years ago, despite a doubling in productivity, is a national disgrace. It is one of the roots of the increase in multi-income households, in higher levels of indebtedness needed to maintain consumption levels, and of the sharp increase in inequality we have seen over recent decades.
Kenneth Thomas at 12:11:00 AM
Share