Mike Kimel at Angry Bear has several nice posts on the "Laffer Curve" that underlies much of conservative economic orthodoxy in this country. As you may know, Art Laffer famously claimed that at tax rates of 0 and 100%, you would get zero tax revenue, and that in between, there is an inverted U shaped curve, where taxes collected first increase as the tax rate goes up, then decrease as tax rates go higher still, back down to zero tax collected when the tax rate is 100%.

The Kimel post linked above was prompted by an economist at the American Enterprise Institute, Alan Viard, telling the New York Times that all economists know that when the top tax rate is 35%, cutting rates further will reduce tax revenue.


“The Reagan tax cuts, on the whole, reduced revenue,” he explains. “The Bush tax cuts clearly reduced revenue. There is no dispute among economists about that.”

Except, as Kimel points out, lots of conservative economists dispute this, including one who co-authored a paper with Viard! For his trouble, Kimel became the subject of a post at the AEI blog by James Pethokoukis, which started by completely misidentifying him and going downhill from there. For Kimel's enjoyable takedown of this post, see here.

All this led me back to an earlier post of Kimel's, where he makes an empirical estimate of the Laffer Curve, using U.S. data all the way back to 1929, the first year for which official U.S. data exists. I'll spare you the technical details (see Kimel's post), but here's the bottom line: Laffer got it exactly backward, with tax revenue initially falling as tax rates increase, then rising after a further increase in rates. Here is Kimel's estimate of the "true" Laffer curve: 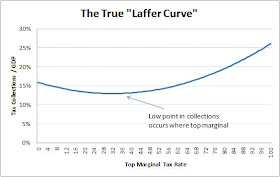 Not only that, as one of Kimel's commenters, Robert Waldmann points out, we actually have experience with a country having a top marginal rate over 100%, Sweden in the 1970s. Contrary to Laffer, not only was tax revenue not equal to zero, in 1975, Sweden's tax revenue was 41.3% of gross domestic product! (OECD statistics, click on "data by theme," then "public sector, taxation, and market regulation," then "taxation," then "revenue statistics - OECD member countries," then "comparative tables") 21.2% was central government revenue, i.e. excluding subnational government and social security. Either way, a long way from zero.

Source: OECD, directions as above for Sweden

Before you supply-siders get too excited about the increase in 2006 and 2007 to 11.9%, remember that the higher Clinton tax rates brought in more revenue for five straight years, 1996-2000.

Though many journalists get it wrong, chessplayers like myself know that "refute" means to conclusively disprove. And the Laffer Curve stands refuted.
Kenneth Thomas at 4:27:00 AM
Share