When Mitt Romney released the second of his tax returns last month, he also gave us a summary of his 1990-2009 taxes prepared by his accounting firm, PricewaterhouseCoopers (PwC). The whole point of that exercise, aside from trying to distract people from demanding the actual returns, was to muddy the waters and hide behind the supposedly strong reputation of PwC: an accounting firm would never lie, would it?

Of course, this is a silly question on its face. Who do you think designs abusive tax shelters, other than tax accountants and tax attorneys? Now, in a new study by the Tax Justice Network, we see that there is a positive correlation between a jurisdiction's (remember, not all tax havens are independent countries) secrecy index and the number of banks and Big Four accounting firms (PwC, Ernst & Young, KPMG, and Deloitte) per capita present there. The report documents one "leveraged partnership transaction" that PwC both designed and then pronounced to be legally valid (in what is usually termed an "opinion," for which it was paid $800,000), which the U.S. Tax Court strongly criticized as a "conflict of interest" when it upheld the Internal Revenue Service's squashing of this arrangement. 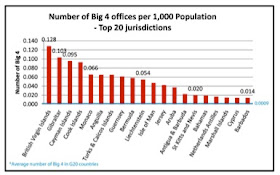 Similarly, we find that comparing the secrecy score of the 20 worst tax havens with the Tax Justice Network's broader list of 71 tax havens and with the G-20 nations shows a much higher mean and median secrecy score in the tax havens than in the non-havens, as the next graph shows. 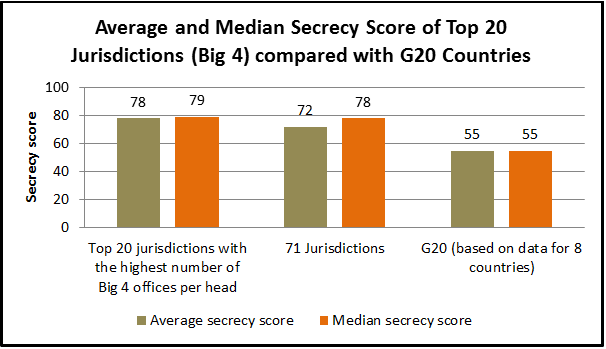 As Richard Murphy, one of the authors of the report, comments at Tax Research UK:


This research lets us conclude that working in conditions of secrecy has become an inherent part of the work of bankers and accountants. It suggests that this has led to a culture of creative non-compliance with laws and regulations, which is likely to increase the potential for, and volume of, crime. At the same time, banks’ and Big 4 firms’ lobbying for laws and regulations that reduce transparency is likely to have resulted in further opacity in the world’s financial system.

This, then, is the world in which Mitt Romney travels, a world in which accounting firms actively seek to create tax avoidance opportunities with little concern for whether they step outside the law's boundaries, and in so doing facilitate the transfer of the tax burden from the 1% to the 99%. In my opinion, PwC's assurances about Romney's tax situation are not worth the paper they're printed on.

Bonus question for President Obama to pose in the third debate: Why is the "McCain precedent" (2 years of tax returns) more important to you than the George Romney precedent (12 years of returns)?
Kenneth Thomas at 5:09:00 AM
Share